Marcos Eguren collects the prize garnered by Finca El Bosque 2014 at the 32nd edition of the guide’s “League of 99” Awards.

The Guía de Vinos Gourmets wine guide, in order to recognise the work of professionals in the Spanish wine sector, once again organised the awards ceremony during the celebration of the Salón Gourmets fair, as part of an effort to acknowledge the excellence, careers and innovative ideas that are revolutionising the sector.

This award ceremony was held on April 25 in Madrid, where once again the Eguren family, of Viñedos y Bodegas Sierra Cantabria, was honoured. At this 32nd edition the man tapped to pick up the accolade was Marco Eguren, the winemaker and figure behind the award-winning Finca El Bosque 2014 wine

Finca El Bosque is a 1.48-hectare vineyard located in the La Rioja locality of San Vicente de la Sonsierra, planted in 1973 with the Tempranillo variety, giving rise to a wine that is “robust and expressive and of a well-rounded complexity,” according to Marcos Eguren. It is aged for 18 months in barrels of oak, both French and Central European.

The Eguren family’s wine-growing venture in La Rioja and Toro aims to produce wines evoking the special character of the winery, defined by its versatility and pronounced identity. Marcos and Miguel Eguren, along with their father Guillermo and the new generation, represented by Eduardo Eguren, have striven for excellence in the care they have shown the vineyard and their great respect for the fruit in its cellars, to turn out wines qualifying as new classics; wines that endure over time, fusing fruit, potency and structure with elegance, freshness and subtlety.

Five generations of winemakers, their roots deep in San Vicente de la Sonsierra, have woven a saga of complicity between man and vineyard, drawing out all the potential of a unique variety, Tempranillo, going to every length necessary to transmit its expressiveness through a set of exceptional wines of the highest purity and identification with the terroir.

Marcos Eguren, heading up the oenological work, with the help of his son Eduardo, and Miguel Eguren, in management, lead a project dedicated to a quest for wines that evoke the vineyard, of a great versatility and distinct personality. Guillermo, the father of the current generation holding the wine group’s reins, considers himself, above all, a collector of vineyards. And his sons have understood this role, with their philosophy firmly grounded in excellent care for the vineyard and the utmost respect for the winery’s fruit, to produce wines constituting new classics. Wines that endure over time, combining fruit, strength and structure with elegance, freshness and subtlety. 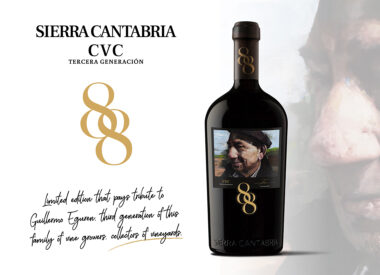