FENAVIN 2015 open to the world 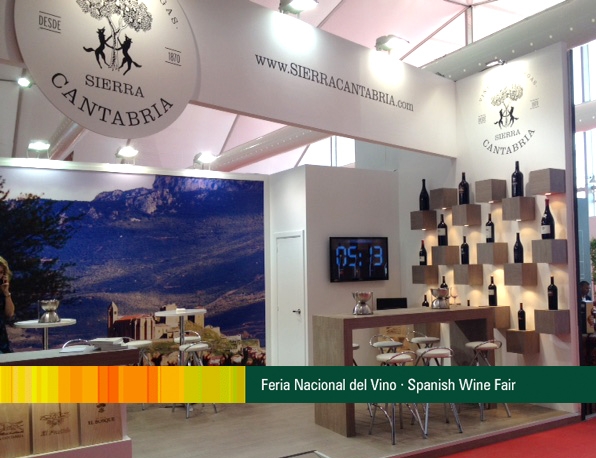 Sierra Cantabria showed their wines to the world in the latest edition of the Fair FENAVIN 2015.

The National Trade Fair on Wine, organized by the Provincial Government of Ciudad Real, has closed its doors early this afternoon with an outstanding result that has allowed the President of FENAVIN, Nemesio de Lara, to announce with satisfaction that this important wine growing event has once again been an absolute success, and not only because it has reached its eighth edition without flailing, but because it has actually increased the positive figures of the last edition and then some. Despite the fact that on this occasion the organization of the event was more complicated and complex due to the crisis, “a prudent and restrained calculation” of 278,000 commercial contacts and 97,522 visits, of which 68,246 are professionals, makes it more than evident, in the opinion of De Lara, that the trade fair is profitable and useful for the industry and for the citizens.

After commenting that FENAVIN is a powerful brand of a public nature that should not fall into the hands of third parties that would speculate with the event, De Lara also commented that 1,361 wineries have had their products on display, 12% more than in the past edition, with a total of 816 international buyers coming in from 65 countries that the Business Center has handled, along with 2,793 buyers that have arrived on their own and more than 15,000 national buyers and distributors. In this sense he also added that for the first time ever importers from the Association of Southeast Asian Nations have also visited Ciudad Real, from countries such as (Singapore, Philippines, Vietnam, Indonesia and South Korea), and likewise from emerging Eastern European countries such as Belarus and Kazakhstan, and importers from the African continent, more specifically from Kenya and South Africa.

On the other hand, the “Contact With…” Program has given rise to 5,236 commercial meetings and in the Wine Gallery there have been 1,492 wines available in a perfect state of display, while 11,280 bottles of wine have been uncorked and 14,180 visitors have been recorded. De Lara has apologized to the non-professional visitors that were unable to participate, although he has also recalled that FENAVIN has an eminently professional nature and that that is precisely the driving force behind it.
He also mentioned the novelty in the eighth edition of FENAVIN Original Wine & Food, a new space that has received 2,652 visitors and where 89 agri-food products from the province of Ciudad Real have been enhanced and promoted in perfect pairing with 89 wines.

On the other part, 96 activities have taken place, with 234 lecturers and 355 persons have been present “working as staff” and all the comments that have been made, according to his statements, have been words of praise for the trade fair. In this sense he highlighted that the wineries have been able to close contracts, apart from the fact that recognized personalities such as José Luis Bonet, President of Freixenet and of Spain”s Chamber of Commerce, have praised FENAVIN. This has likewise been the case with the director of the IPEX, Ángel Prieto, along with Víctor de la Serna or the American Journalist John J. Mahoney, from New Jersey Wine Radio, among many other outstanding personalities.

The President of FENAVIN has assured us that these are objective data that make it quite evident that the trade fair has notably and absolutely surprised the visitors, which backs up many of the things in this wine growing event that would not be possible without its Director, Manuel Juliá and without the political support of the provincial government and, in particular, of the government team.

De Lara also added that the trade fair has proven that “public events are useful”, although he has gone even further and stated that, in view of the future, FENAVIN needs an alliance of institutions, because this event is of interest to the industry, as a very high percentage of the wineries are from the province and the region. “We don”t come to FENAVIN to get on the right side of the politicians or of the party that governs this institution, but in fact we come because FENAVIN is useful and profitable”.

He has expressed his appreciation to the sponsors, buyers, exhibitors and the media for their participation at FENAVIN, a trade fair that, according to that commented, costs 3,3 million Euros, of which 2 million are used to fit-out the 22,000 square meters of grounds as if they were constructed pavilions, and yet it can still be perfectly profitable.

On to a different matter, he considers that a lot of thought must be put into matters that affect the industry, as he understands that it currently finds itself in a very complex situation in the world of wine. The reality is that in Spain a huge quantity of wine is produced, likewise underlining the exporting capacity, yet while the Spanish liter of wine is paid at 1,16 €, French wine is paid at 5,37 €.

He has also wagered on promoting and encouraging domestic consumption of wine with intensive and sustained campaigns. And he also champions hard work that must be put into the quality of the bottled wine so as to penetrate third countries.

WE SHALL BE ATTENDING FERIA DEL VINO 2015 AT GERMANY